What Are Cymbals Made of? 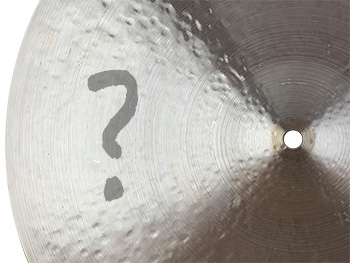 Cymbals are made of metal - most people know that. But what types of metal are actually used to make cymbals and what do they consist of?

Most often, three different kinds of alloys are used for cymbal manufacturing. We take a closer look at them in this article.

Cymbals Made of B20 Bronze

This alloy is also known as "bell bronze". The alloy consists of 20% tin and 80% copper.

It is the B20 alloy that is associated with professional cymbals and it is also used for e.g. gongs.

The B20 bronze must be heated in order to be processed. Therefore, producing a B20 cymbal is a long and time consuming process.

Among other things, the B20 cymbals must go through a rolling machine up to 15 times before reaching the thickness required for hammering. (Here it is worth noting that the cymbals must be reheated in an oven before each rolling.)

Note:
All cymbals on CymbalONE are made of B20 bronze.
(With the exception of the UFO low-volume cymbals made from zinc).

Cymbals Made of B8 Bronze

B8 bronze consists of 8% tin and 92% copper and is a so-called malleable alloy. This alloy can - unlike the B20 bronze - be rolled out in plates in a cold state. This makes the material much easier to process. Therefore, it is also cheaper to make cymbals of B8 bronze.

The B8 bronze is used primarily for cheaper cymbal series, typically aimed at beginner drummers. However, there are also examples of professional cymbals made of B8 bronze such as Paistes 2002 and Giant Beat series.

Examples of Cymbals Made of B8 Bronze

Cymbals Made of Brass

Brass is used exclusively for beginner cymbals. These are the cymbals you get when you buy a cheap beginner drum kit. The brass is typically made of 63% copper and 37% zinc.

Examples of Cymbals Made of Brass:

There are also cymbals of other metal alloys. It is typically the content of tin that varies. An example of this is Paiste's Signature alloy. It consists of somewhere between 13-18% tin and the rest is copper.

Nickel silver has also been used in the past to make cymbals. An alloy that - in the opinion of some - should be called nickel-bronze, as it consists of 12% nickel and 78% copper. This alloy, like B8 bronze, is also malleable and can be purchased in whole sheet metal. Examples of cymbals of this alloy is be Meinl Streamer and Marathon N12, Paiste 402 as well as the original Paiste 101 from 1970 (the current 101s are made of brass).